A Canalys report has suggested that India has seen a positive growth of 10 percent in shipments and has also managed to sell 137.2 million units in 2018, which is 12 million more than their reported 2017 numbers. Unfazed by such a global scenario, India currently is accountable for 10 percent of the world’s smartphone market share, which is a 6 percent increase in comparison to five years back. Xiaomi has been a big contributor to these good numbers, and it has managed to take a prominent position in India for a full year and has shipped 41 million units in 2018, and has raked in 30 percent of the Indian market. Canalys has also found out that India has become the largest market for Xiaomi all over the world in Q4 2018.

The Canalys report suggested that the country has remained as one of the six in the top 20 smartphone markets. It is said to have performed better than Indonesia, Russia, and Italy. With regards to Indian numbers, Xiaomi has been on a roll in 2018 and has raked in 30 percent of the market share, in comparison to the 20.6 percent in 2017. Their smartphone shipments have increased from 25.7 million in 2017 to 41 million last year. Samsung was overpowered to the second spot due to the extensive growth of Xiaomi, but Samsung managed to grow positively in India last year. They managed to ship 35.4 million units in 2018 and gained 25.8 percent market share, in comparison to their 2017 shipment numbers of 29.4 million which was 23.6 percent market share. 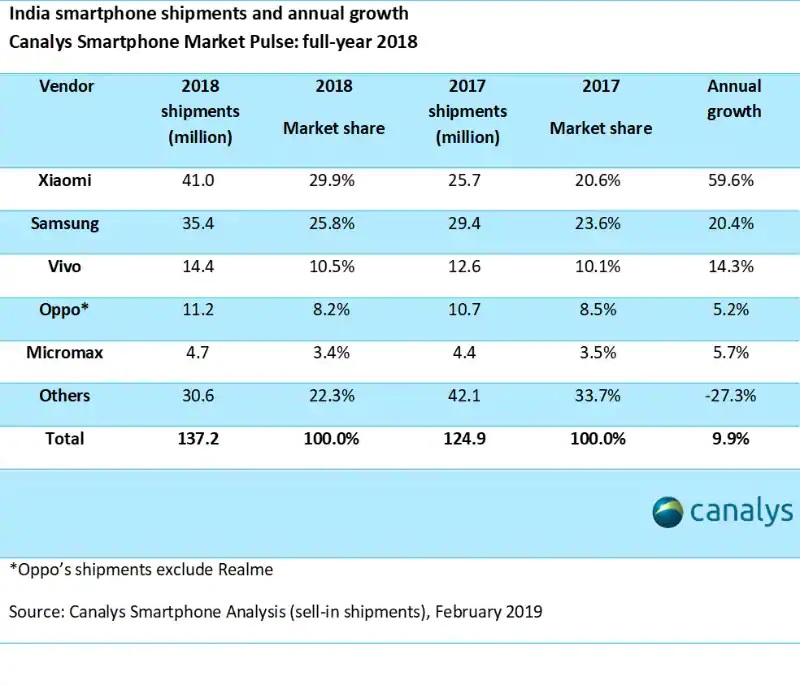 Canalys Research Manager Rushabh Doshi said- “2018 had been a defining year for smartphones in India. The impact of the decline in the Chinese market on vendors like Oppo, Vivo, and Xiaomi was prominent, and Oppo and Vivo reduced their above- and below-the-line marketing efforts which would be used to counter the falls in their Chinese businesses. Xiaomi has remained focused on India and has given excellent results. India is currently the biggest market for Xiaomi all over the world. The Chinese vendors have done great in riding the spread of 4G on the local apps as well as services. The app-based economies have flourished.”